How to Properly Store and Smoke a Cigar

A traditional cigar feels robust compared to a smaller cigarette thanks to the temperature and moisture used to make it last longer, as well as its more organic composition. Sometimes you’ll want to smoke only part of the cigar, and save the rest for another occasion. Properly storing the cigar in these situations is crucial. While there are many ways to store, the best method would be using a humidor which will keep the cigar fresh for the longest amount of time. 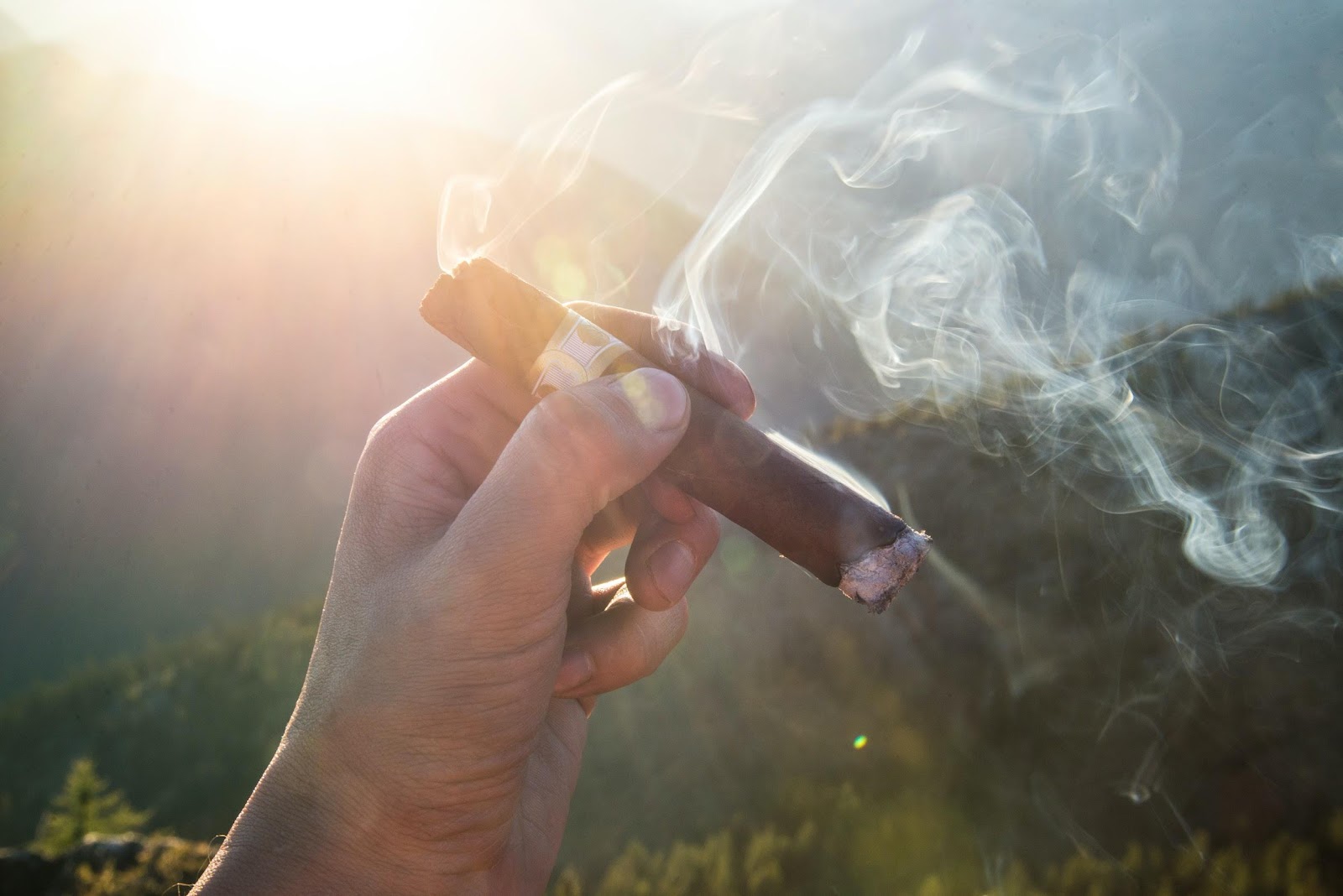 What is a Humidor and How Does it Work?

A humidor is a device that prevents a used cigar from losing its shape, taste, and freshness. While there are methods to keep your cigar intact even after use, a humidor works much better than if it were left without a proper form of storage or in a place with room temperature; the tropical environment provided by a humidor prevents the cigar from breaking up its form.

The device itself uses a controlled airflow to keep a consistent humidity around the mid-70s, and they're available in small and large sizes. Small humidors are perfect for taking with you on the go while larger ones can hold a large number of cigars at once. It should be noted that a humidor isn't going to guarantee a cigar's life will be extended; it may begin to get a little moldy if kept in the moisturized interior for too long. This means you'll need to take it out and use it regularly.

A hygrometer and thermometer are typically included for you to use to monitor the humidity and temperature. You should check these at least every week or two to make sure the levels are ideal. Also keep an eye on the cigar's condition when it's inside the box. If it starts to dry out, you’ll need to add more water to raise the humidity. However, if the cigar starts to get moldy, the humidity is too high and you’ll need to dispose of it. 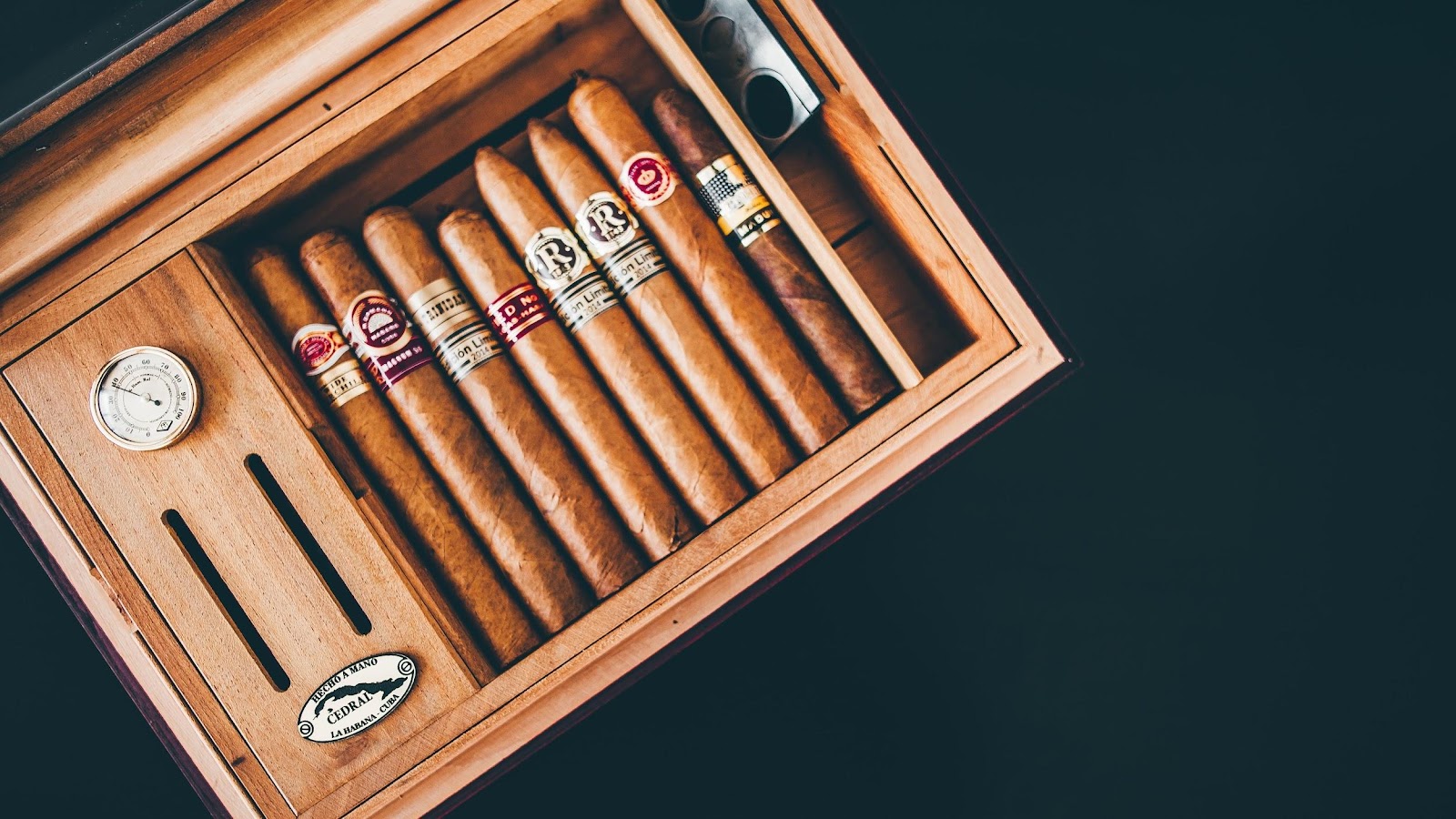 How to Maintain a Humidor

It’s very important to maintain your humidor for best results. Be sure to wipe your humidor with a damp cloth and distilled water every once in a while. When you do this, inspect the humidor and ensure that it seals correctly. You can check this by placing a dollar bill or thick piece of paper where half is in the box and the other half is outside. If you tug on the paper and it easily slides out, it’s time to purchase a new humidor.

While you can use a small humidor to store a single cigar, it’s best to store several at a time to help regulate the humidity levels. You will also want to add distilled water to the humidifying device when levels get low so the cigars can remain fresh. Most importantly, do not leave a humidor under direct sunlight or around an air conditioning vent.

How to Store Cigars Without a Humidor

With everything mentioned about the benefits of using a humidor, you might be wondering what could be done to store cigars if you lack one. As mentioned previously, cigars can dry up in a few days and will be rendered useless if you don’t take any precautions. Luckily, there are methods to put a cigar away if you don't own a humidor. For a simple method of storing your cigar, a Ziploc bag is one way to keep it safe. Use a slightly damp sponge to help keep the inside fairly humid while keeping the Ziploc bag tightly sealed. Don’t forget to check on your cigar often to make sure it’s not drying out or getting too damp.

If a Ziploc bag doesn't seem like enough to keep your cigar intact, then why not go for something a little more protective? Grab a Tupperware container or a glass jar and use that as a substitute for a humidor. The durable materials used for the container work much better than what the Ziploc bags offer. Like before, a damp sponge will be needed but with more distilled water so as to prevent mold from building up; tap water won't be recommended because it'll expose your cigar to bacteria that speeds up mold growth.

The last option you could use is somewhat around the size of a humidor, and it's a small cooler you might have lying around. It works well for keeping cigars in a safe place for a few months, and you could add distilled water, a humidification device, and a hydrometer for a total price of fewer than 20 dollars. While it may not seem as fancy or reliable as a humidor, it is a cheaper option for reliably storing your cigars.

Cigar Lifespan for Each Method

So we now know the humidor is the best option for storing cigars, but how long can they last in each method? It is said that a cigar can last between two months and twenty years, but there are a handful of factors that would affect its lifespan. As steep as the time duration may seem, and given how location and usage will vary, it’s impossible to estimate exactly how long each cigar can last. That being said, a humidor can keep a cigar fresh for five years if the temperature is consistent and the interior is cleaned regularly.

Without a humidor, a cigar will last up to thirty days before drying up, even if they're kept in their original box. After partially smoking the cigar, it will last about one to two days before quality drastically depletes. If you want to leave your cigar in a Ziploc bag, then you better make the most out of it within three days. In terms of keeping it in a glass jar, a cigar will either last for two weeks with just a jar or nearly a month when it's kept at around 70% humidity. And finally, a cooler will help a cigar last for three months if it's kept safe with a sponge and distilled water. 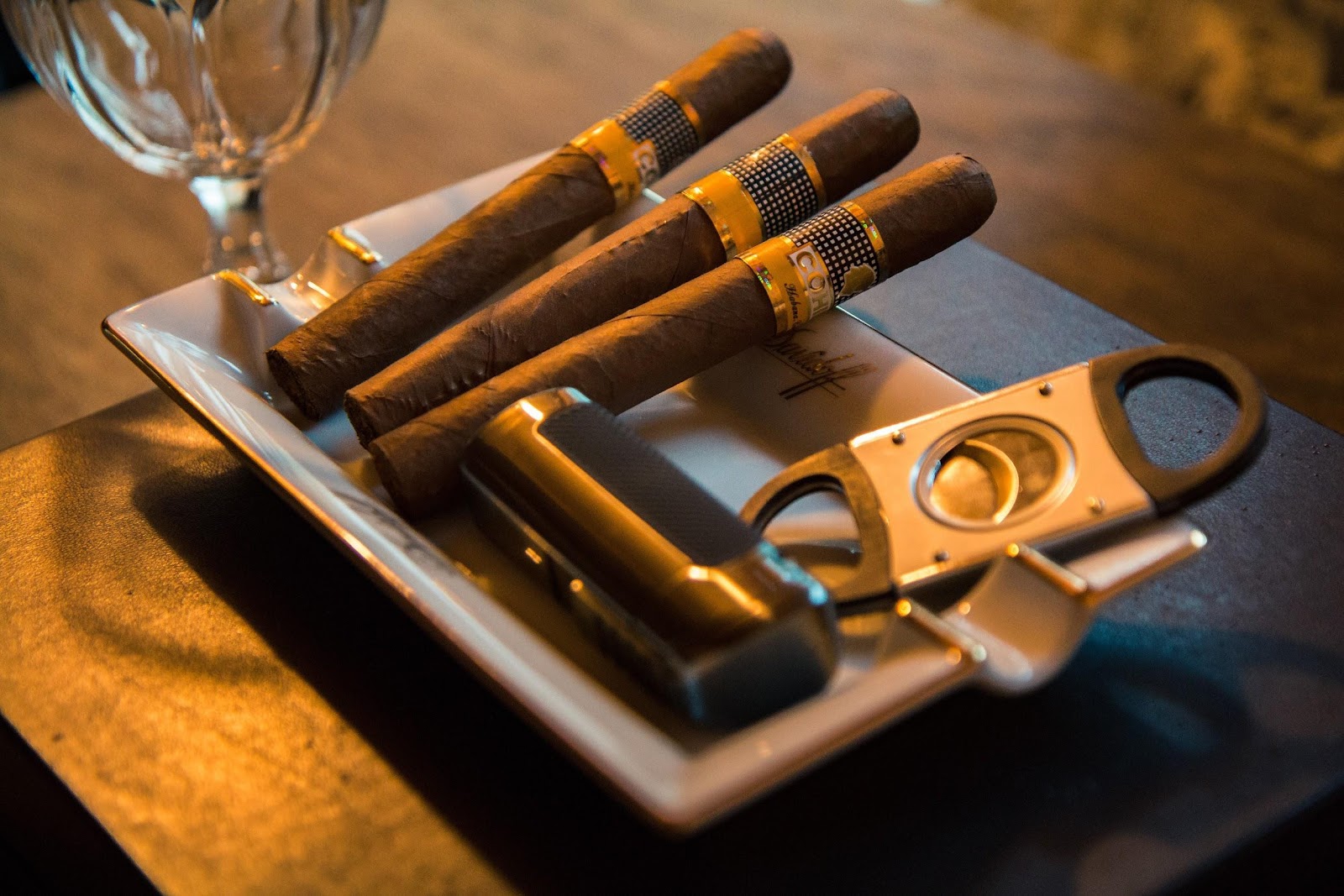 How to Cut a Cigar

Now that we've covered the storage methods for your cigars as well as their life spans, let's go over actually using them. Before you smoke a cigar, you'll first need to know how to cut one. Improper cutting will lead to an underwhelming experience, so it’s crucial you learn what needs to be done in order to cut your cigar properly. A cigar has a specific kind of "anatomy" that, as unheard of as it may seem, will give you an idea of what you should and shouldn't be doing when you're cutting. Inside a cigar are tobacco leaves rolled up within a well-made wrapper. The open end is referred to as "the foot" while the enclosed part is the "cap"; the cap must be cut open in order to smoke it.

You'll need to cut a smooth opening for your cigar without resulting in the wrapper coming undone. There are several types of cutting devices you can use: the guillotine, punch, and a normal knife. With a guillotine, you have a dual-blade cutter made of stainless steel to help it last for a long time. A punch, on the other hand, simply punches a hole in the cigar end without needing to do any cutting. They may not be as common and do look a little unusual, but they are a little safer than most cigar cutters. And finally, a standard sharp knife will cut just fine if you don’t have a tool specifically for cigars.

How to Light a Cigar

If you’ve ever lit a cigarette, you might think lighting a cigar is similar and just as easy; however, properly lighting the cigar is crucial to getting a satisfying smoke. You have to get both the wrapper and the tobacco leaves lit evenly so the smoke won't feel compromised. While you can get the job done with a normal lighter, butane lighters and cigar matches will result in a much better experience. Butane lighters give off a clean burn that you won't get with liquid lighters, and they produce heat faster. Cigar matches, on the other hand, are a little more natural thanks to it being a 4" wood of stick and lacks the off-putting sulfur flavors that may come from certain lighters.

To begin lighting a cigar, you should first toast the foot by holding it close to, but not in, the flame. Rotate the cigar, and it'll slowly start to burn. Wait until the tip darkens for 10 seconds while the outer layers start to ignite, then you may begin to smoke. You may need to relight the cigar a couple of times throughout smoking if it stops burning. 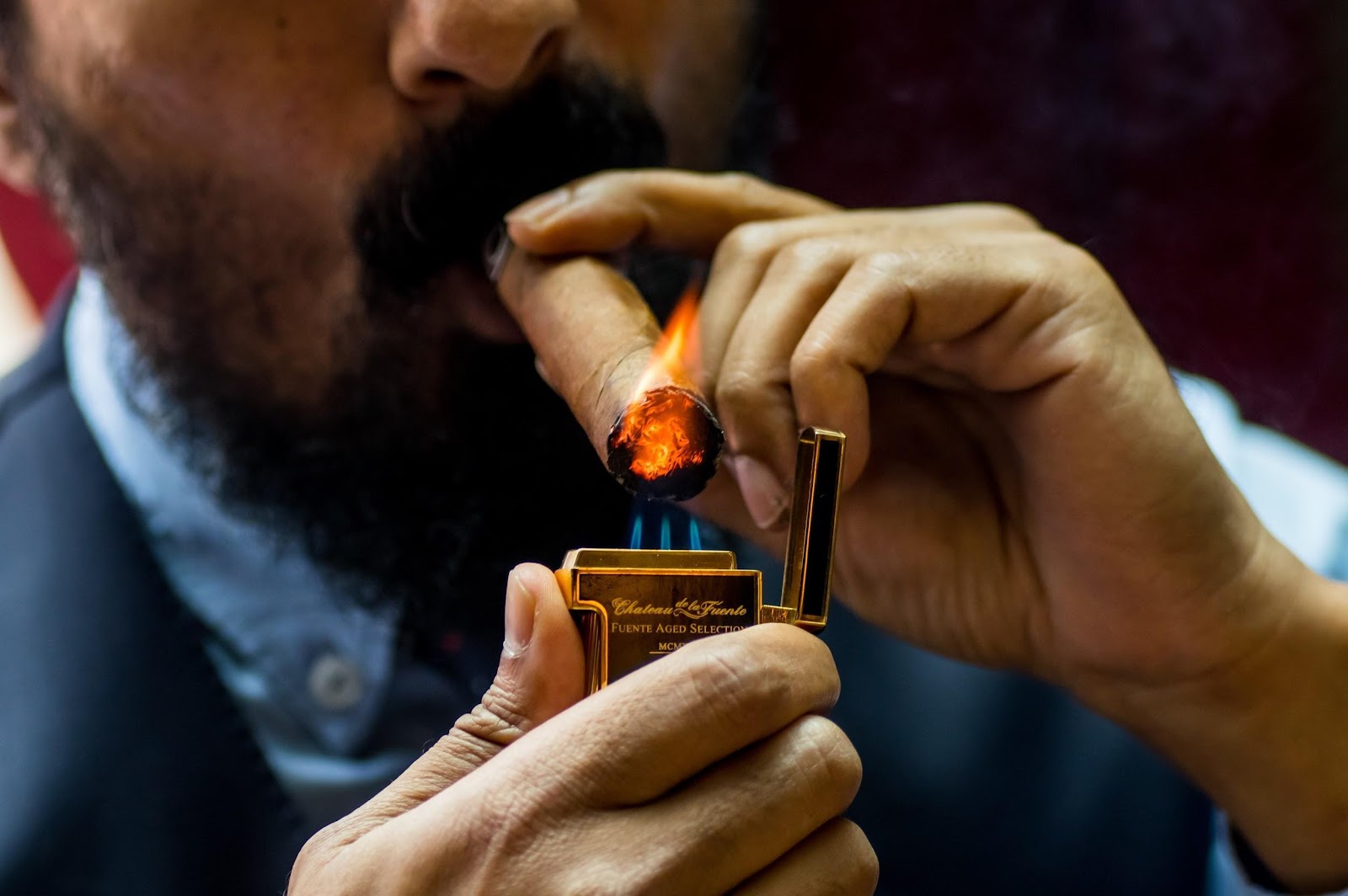 How to Smoke a Cigar

Unlike cigarettes, cigars are thick in appearance and give off a different vibe than you'd otherwise expect. When you're smoking a cigar, try puffing on it as if you were sucking a straw. Don't inhale your cigar like you would with a cigarette. Try taking at least three slow, long draws if you want to have a worthwhile light. If you have a toasted cigar foot with an ashy edge, then you're smoking the cigar properly. From then on, you’ll want to take a puff every minute or so; do not puff constantly or your cigar may overheat and taste bitter.

What Common Issues Should You Know About?

Aside from refraining from smoking far too much, there are some common issues worth mentioning if you're new to smoking cigars. Tunneling, double bunching, and canoeing are three circumstances you might run into, so we will break them down in full detail:

This occurs if a cigar's wrapper doesn't burn properly and results in it caving unusually. Cigar tunneling happens due to the tobacco either being too moist or too thick, meaning it won't burn at a consistent pace compared to the rest of the cigar's anatomy. Alternatively, your cigar may have a small gap between the wrapper and the binder - improper wrapping will lead to tunneling.

Double bunching is a rare occurrence that is similar to tunneling. It occurs when all of the leaves start to fall towards the cigar foot and result in the tobacco forming a tunnel. To prevent this from happening, make sure your cigar's burn is nice and even at the foot. While there might be varying degrees of quality control from cigar to cigar, a properly burnt one should have a well-formed cone once the ash is removed.

When your cigar starts to canoe, it either isn't well-made or isn't lit properly. It results in the taste lacking any proper satisfaction you'd normally get. To combat canoeing, try using a soft flame so the foot starts to burn as intended. Properly lighting your cigar the first time will help to prevent this from happening.

If you're capable of knowing how to properly cut, light, and smoke a cigar as intended from the instructions above, you won't regret the experience that a mere cigarette doesn't offer. You can enhance said experience if you have a proper humidor, though thinking smart with an alternate method of storage will at least keep your cigar kept safe for future uses. 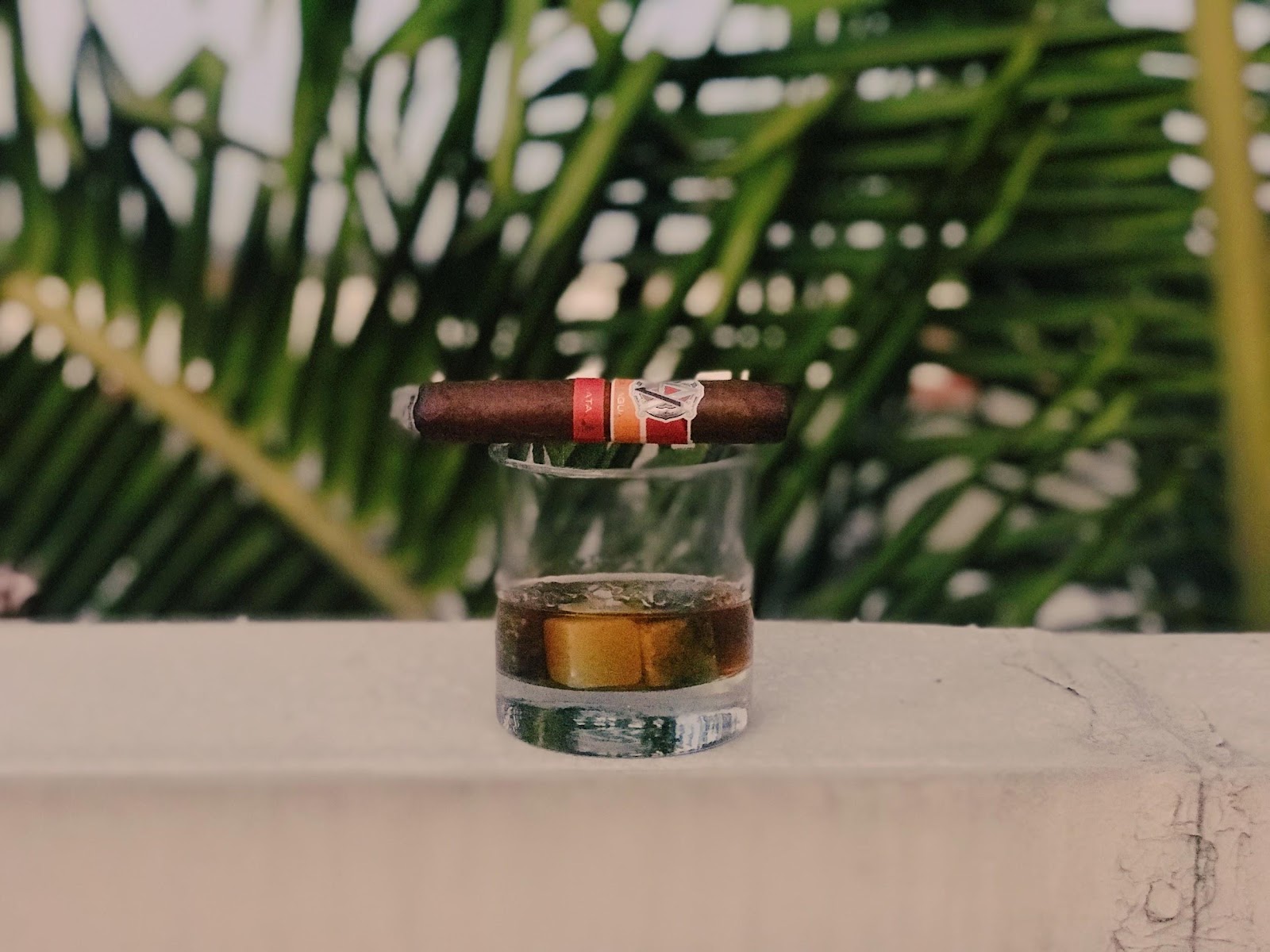 Knowing how to properly cut, light, and smoke a cigar is the first step to becoming a cigar aficionado. You’ll be able to enjoy the luxurious experience of sipping a glass of whiskey and smoking a cigar, and you’ll know exactly how to store your cigars whether they are fresh or half-smoked.